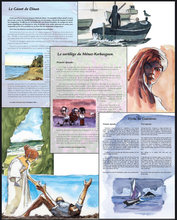 Every year, Peninsula will have you discover a new local legend as you make your way through the labyrinth.

Since our creation in 2001, that makes nine original stories (100 % local) which have shared with you the adventures of engaging characters in the most beautiful, natural settings of the Presqu’île de Crozon. These fabulous tales were written by Michel Tréguier and illustrated by Bruno Le Hir’s magnificent watercolors. Since July 2005, these legends are available in a collection published by Editions Buissonnières (see the « Peninsula books » section of our website).